Aiming for a Bright Green Future 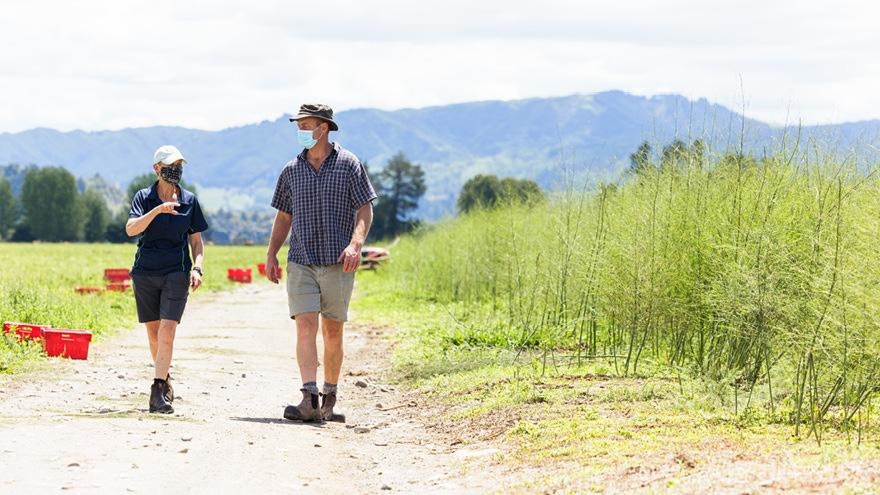 Aiming for a Bright Green Future

Sam Rainey, Manager of Mangaweka Asparagus in the central North Island and Chair of the New Zealand Asparagus Council (NZAC), doesn’t shy away from the challenges his sector is facing while continuing to champion the virtues of this seasonal produce.

Sam manages around 80 hectares of asparagus for owners George and Diana Turney. Mangaweka Asparagus was established around 25 years ago on what was originally a sheep and beef farm, and Sam’s been in his role with the business for the past seven years. George and Diana first purchased land in Rangitikei in 1989 with a small block in the Kawhatau Valley where their interest in asparagus started. At that stage the asparagus all went to a cannery. The current operation is in the same valley with fresh asparagus going to supermarkets all over New Zealand under the Mangaweka Asparagus brand. A small amount still goes to the cannery and, usually, some is exported.

“Export is one part of our business that’s down, but this year’s been particularly difficult with Auckland’s food service and restaurants out of action for so long,” Sam explains. “There’s been oversupply for the early part of this season which pushed prices down. The flow-on effect of Auckland being in lockdown impacts other regions and sectors of New Zealand more than you might realise, but we’re all optimistic that we’ll come out the other side.”

Weeds are the number one issue for commercial asparagus growers and control is traditionally through a limited array of residual herbicides.

Mangaweka Asparagus imported an LPG flame weeding unit from Italy two years ago which is used during two parts of the season to reduce the reliance on herbicides.

Sam says timing is everything when using the flame weeder just prior to and during harvest to clean up little weed seedlings in the picking blocks. “If you get the right speed and the weed at the right stage, you can take it out with the flame weeder. The other use of the flame weeder is cleaning out old fern from previous seasons and preventing overwintering of the spores. That fern is a host for Stemphylium leaf spot which causes purple spot on the spears and can reduce yield.

Daniel Sutton, Fruitfed Supplies’ Technical Specialist for vegetables, is helping address the issue of a limited array of herbicides registered for asparagus by working with the NZAC on herbicide trials. This trial work utilises in-field, grower-led demonstration sites to look at current grower practice with herbicides compared to other available options. By evaluating how these products are preforming in field, and on specific weeds, it allows for a more controlled approach to weed control.

Daniel explains: “Asparagus is a relatively minor crop, so there isn’t much product development. We are evaluating herbicide options for them as they have been historically reliant on the same mode of action herbicides for the last decade or more. The greatest benefit to the industry would come from a new registration for asparagus which offers strong weed control, crop safety and an alternative mode of action to current options to improve resistance management. As Mangaweka Asparagus has done, an integrated approach with a flame weeder can also be a good option.”

Sam continues: “We are grateful to have the PGG Wrightson team, which includes our Technical Horticultural Representative, Kath Lee-Jones, support a small industry like asparagus. The reality is it’s hard to get chemicals registered. Last year’s trial in Hamilton looked at residual herbicides and there’s another trial this year looking at further options. In spring you need to clean up your beds to have a period without weeds for picking. We’re looking for herbicides that offer an alternative to the existing options so we can rotate products as per best practice.”

The asparagus sector has felt the affects of labour shortages just as other farming sectors have. “Through the Recognised Seasonal Employer (RSE) scheme, the group we normally employ are from Vanuatu but, of course, they’ve been unable to travel here for two years. We are fortunate to have teamed up with a Hawke’s Bay company, Crasborne Fresh Harvest, who had a group of Filipino workers from their packhouse crew available to work in other regions. We’ve been lucky to have them, and they also needed the work, having been in New Zealand for nearly two years now and unable to get home. We would normally pick through to January but we closed at Christmas this year. The picking team are off to Bay of Plenty for a month before the apple picking season commences, back in Hawke’s Bay. This also allows us to rest some blocks which aids yields next season.”

As Chair of the NZAC Sam acknowledges it’s a challenging time for the sector with returns currently at an unsustainable level.

“However, I believe there is a future for asparagus. Right now, we’re at a difficult point being reliant on the domestic market as costs grow every year. Asparagus is very labour intensive and it’s more and more difficult to find staff willing to do this kind of physical work. It’s great to see a project underway to develop a robotic harvester. This four year project, funded by Sustainable Food and Fibre Futures, is in the very early stages with Robotics Plus Limited and our Council. It’s hard to know what to do with this intensive labour requirement until we get this robotic technology or some kind of labour saving technologies which make the job easier.”

Another Council project is looking at how New Zealand asparagus can be re-established as an export crop although Sam notes that the sector is some way off being competitive at present.
Sam’s last message is that more New Zealanders need to eat asparagus. “Consumption statistics show it’s going backwards. Young people don’t know what they’re missing and it’s our job as the industry body to get out there and promote it. It’s nutritious, it’s versatile, simple, easy and fresh. That’s our immediate focus to promote it as a great vegetable.

“The industry might shrink in the next few years if we’re not able to send any offshore. But it will bounce back if we can find a way to reduce costs. Yes, these are uncertain times and if we have another season like this, we’ll see some growers dropping out but there is a bright future because it’s a great crop.”