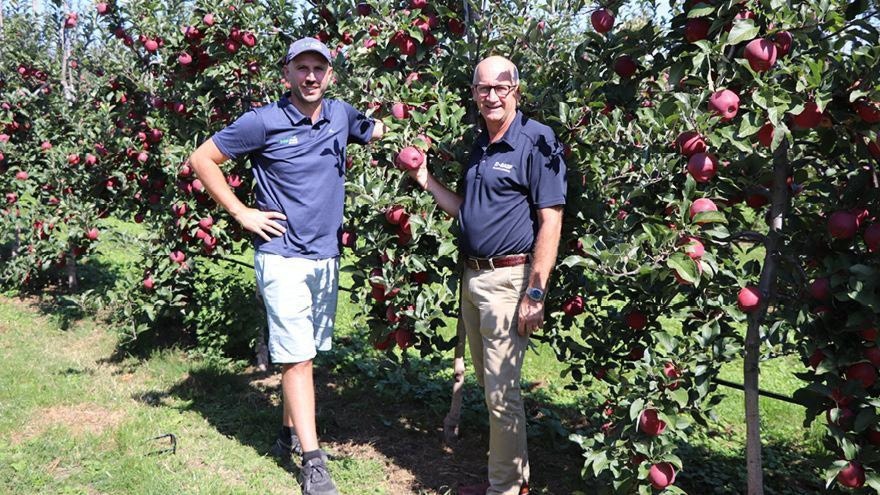 If Polyram® was a person, it’d be looking at hanging up its boots and retiring having done a reliable and trustworthy job over a long career. But as Polyram the fungicide turns 65, it’s still going strong.

Shane Flynn, Business Manager at Freshmax Orchards in Hastings, hasn’t been around quite that long and is way too young to retire. Nevertheless, he’s already had plenty of experience and
success with Polyram.

Shane joined what was then Crasborn’s 15 years ago, working his way up through the organisation with stints in orchard and operations management. Polyram has been a cornerstone of the company’s pipfruit protection against black spot ever since he started. This season, it’s once again showed them how well it works on the latest varieties like Dazzle as well as its fellow industry standards like Royal Gala.

When Polyram first came to market it raised the bar for fruit finish compared to other protectant fungicides already available. In the early 1970s, a new Polyram formulation significantly enhanced that competitive edge. The current formulation, developed in the 1990s, reduced dust when pouring and mixing the fungicide and improved its stability in the spray tank.

“Polyram’s a well-supported product,” Shane says. “We’ve been happy with the results it’s given us over many years. It’s still an important fungicide in our programme.”

Shane points out that fruit and vegetable suppliers are aware of the need to manage resistance issues, so new chemistry has regularly been added to the rotation over the years without displacing Polyram. Part of the explanation is the alternative fungicides generally have single sites of activity. Because they only act on one part of the pathogen’s lifecycle, resistance can quickly develop. Tank-mixing with Polyram and other broad-spectrum fungicides can help manage that issue.

Polyram became a common broad-spectrum mixing partner for the newly introduced Demethylation Inhibitor (DMI) fungicides in the 1980s. The first DMIs had good curative activity but didn’t give good forward protectant cover. Polyram was the ideal partner to fill that gap.

“We use a lot of Polyram and sometimes overlap it with DMIs,” Shane confirms. “If there’s been heavy rain, we tank-mix the Polyram with a DMI.”

He explains that the combination provides both immediate impact and back-up residual control. “Polyram’s always forward with the event and DMI provides kickback control.”

The most recent addition to the Freshmax fungicide rotation is Belanty®, BASF’s innovative DMI that can control pathogens with tolerance to other Group 3 products.

“We’re just finding our feet with Belanty because it's quite new,” Shane says. “We’re gaining confidence as we’re getting to know the product and it’s all looking good.”

And while Shane has nothing new to learn about using Polyram, he’s impressed that even such a veteran product is associated with a recent innovation. “The work that BASF has done with Agrecovery to recycle Polyram bags is a great initiative. It’s good to know they can be used again somehow.”

More information about BASF products for use in pipfruit crops is available from your Fruitfed Supplies Technical Horticultural Representative.