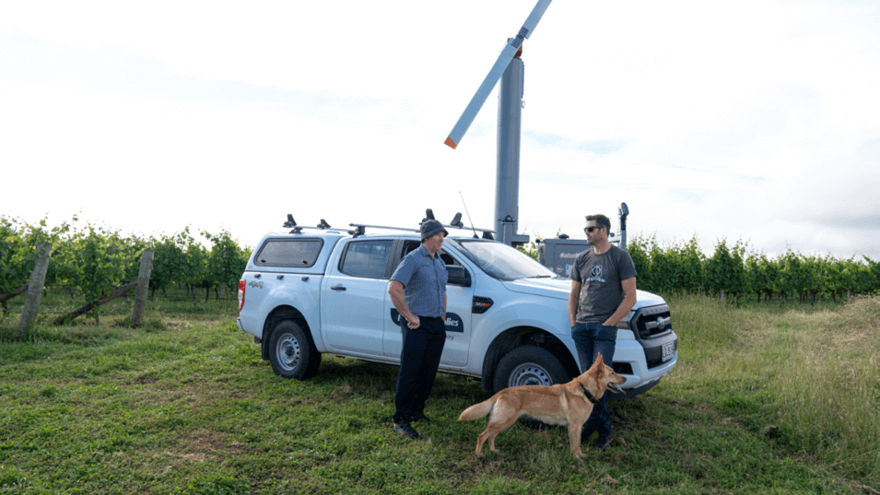 Andrew Coleman, Viticultural Manager for Osawa Wines in Hawke’s Bay’s Maraekakaho district, faced an earlier and heavier season of frosts in the spring of 2020 than is typical for their area.

“I’ve never fought so many frosts,” Andrew says. “It was pretty full on at the time and ultimately it was the opportunity to lease the portable Orchard-Rite wind machine from Fruitfed Supplies which got us through.”

The 36 ha organic vineyard of primarily pinot noir, sauvignon blanc and chardonnay came back under Osawa’s direct management in 2020, having been leased to another winery for several years. Frost fighting measures utilise overhead sprinklers from an onsite dam and every year, there was some pressure on available water volumes. However, the start of the 2020-21 growing season was out of the ordinary in terms of the number of frosts.

As Andrew explains, with frost events occurring faster than the dam could be refilled and not enough water to run the overhead sprinklers across the whole vineyard, they needed to choose which areas of the vineyard could be protected.

They were unable to utilise topical applications of popular frost fighting sprays such as low-biuret urea or Vaporgard as these inputs are not certified organic.

“We turned a couple of blocks off to save water and incurred some damage with the next frost. Meanwhile we were looking at other options like helicopters but they’re pricey. I wasn’t aware a portable Orchard-Rite wind machine was available until it was suggested by our Fruitfed Supplies Representative Andrew McNeil.”

The portable Orchard-Rite was for sale at the Fruitfed Supplies Hastings branch, and an agreement to lease it to Osawa temporarily was made.

“The Orchard-Rite was rated to cover 5 ha and even though we couldn’t achieve the ideal placement for the machine, it protected more like 7 ha from subsequent frosts. There was a little damage around the corners and extremities of those blocks but that was not unexpected as we were asking a lot of it.

“It saved our bacon and meant we could ensure water was available for protecting other blocks. In the end, we came through with relatively little frost damage, maybe 0.8 ha over the whole vineyard which was pretty good.”
Andrew has discussed the possibility of installing permanent Orchard-Rite wind machines to protect the vineyard from future frosts with the owners.

“There are several considerations to be weighed up versus the capital cost of the machines, such as the crop which has been lost every year due to the shortage of available water for frost fighting. There’s the fact we’re unlikely to get consent for another bore, and the quality of water we can draw from our bore is getting worse with more sand which is impacting the pump and lessening the effectiveness of the sprinkler system.”

Andrew says he has worked exclusively with Fruitfed Supplies Hastings for the past three years for ag-chem products and advice, bringing this commitment to his role with Osawa which commenced in December 2019.

“When our previous Fruitfed Supplies Representative moved to a new role, Andrew McNeil (Beef) stepped in with excellent advice and commitment to his customers.”