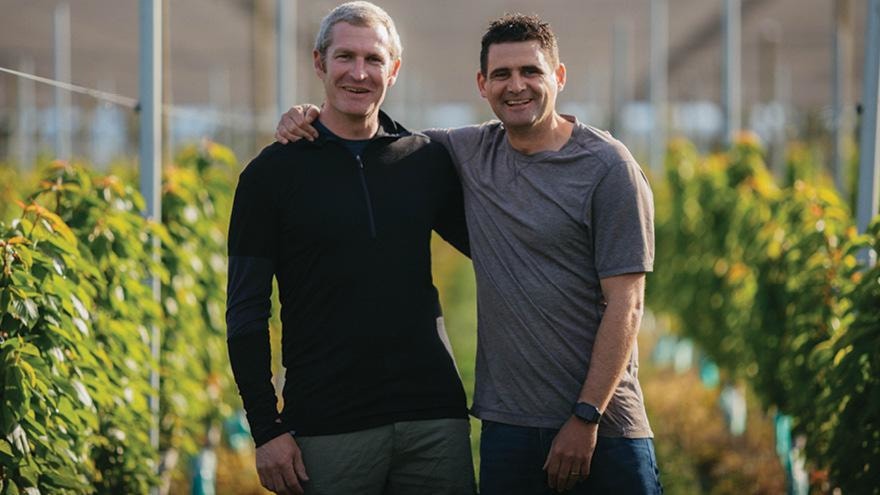 When Mike and Rebecca Casey returned to New Zealand after selling Mike’s business in Sydney, they didn’t know what they’d do next, only that it would somehow help them address climate change.

Mike says they found a property near Mt Pisa, between Cromwell and Luggate, with a house they liked and 9 ha of land with rural zoning. “We came up with a plan to convert the grassland to orchard and calculated the 9,300 cherry trees would sequester 3.8 tonnes of carbon which is reasonably significant and would largely offset our family’s carbon footprint.”

Then they realised, to run a productive cherry orchard with current technologies, the fossil fuels used would generate 50 to 80 tonnes of carbon a year.

“That’s how our journey started with electric technology from all over the world to replace conventional diesel technologies,” says Mike.

Orchard Manager Euan White and his wife Rachel are partners with Mike and Rebecca in Forest Lodge Orchard. Euan emphasises the different way of thinking when using electric-powered equipment. “We can mow for 2.5 hours at a time, for example, so you’ve got to structure your day differently to accommodate that.
We’ve modified golf carts as work vehicles to suit our needs. They’re almost perfect with virtually no maintenance with batteries that last virtually all day from an overnight charge.”

The electrical system, naturally, required a significant investment, but Mike knows the payback is there. A solar and battery system was designed by a local solar company to provide most of the power needed for the all-electric line-up which includes an irrigation bore pump, two cars, tools, forklift, two frost fans, golf carts and the family home. Mike wrote a software programme that buys electricity from the national grid only when the price is below a setpoint and can sell excess power back to the grid when the price exceeds another setpoint.

Planting commenced in the 6 ha orchard in 2019 with the final hectare of trees going in last season. Grown in the upright fruiting offshoots (UFO) high density system, trees are trained on a 2D wire trellis. Initial infrastructure and establishment costs are higher but, again, Mike sees the longer-term efficiencies of the growing system.

“Being more compact, they need less energy for spraying and are easier to pick with staff maybe needing to stand on a small stool to pick the top fruit, rather than climb a ladder. They need less water which is another long-term consideration in any production system.”

Mike and Euan are heading to California in July to see their electric tractor in production at Monarch Tractors and are also talking with a major agricultural equipment supplier in New Zealand about developing a brand-new electric sprayer to their specifications.

“If you consider what a sprayer actually needs to do, that’s move fluid,” says Euan. “If we ran a conventional sprayer on the new electric tractor, we’d get about 90 minutes of runtime. The new sprayer will have its own integrated electric engine powered directly from the batteries of the tractor giving us about 10 hours of runtime. Its fans are two vertical, cylindrical booms being developed especially for us and the pumps needed are tiny in comparison to usual sprayers.”

Mike emphasises that they don’t want to patent or restrict others from using this technology. “We will show anyone who wants to know more about it.”

Both men pay credit to Blair Deaker, their Cromwell-based Fruitfed Supplies Technical Horticultural Representative, and others in the PGG Wrightson team for having a problem-solving mindset. Euan and Blair have spent many hours talking about what needs to be done and how it could be done with electrically powered machinery.

Mike agrees: “We’re in the business of running an electric farm and lowering New Zealand’s emissions which requires doing things in a new way and they’ve been onboard the whole way.”

Other suppliers have also embraced the new ways of thinking from local electrical companies to Steve Wootton of Taylor Pass Honey who came up with a way of moving hives on pallets so Forest Lodge can use their electric forklift to position hives in the orchard to avoid any fossil fuel-burning vehicles being used in this aspect
of production.

This is critical to them being able to sell cherries under their NZ Zero brand with its zero emissions promise. Their first small crop was picked in January 2022 and sold at a 15 percent premium to an upmarket food retailer. By 2025-26 they aim to be in full production of around 80 to 100 tonnes of fossil fuel free cherries each season.

The technology aspects continue with Mike’s investment in a Tasmanian company called Bitwise Agronomy which develops software to analyse high-definition video. “They’ll be able to tell us crop load, what stage of ripeness, how many flower buds, gaps in rows to be filled, how many spurs. Initially the software was for vineyards, but we were the first cherry orchard and now four more are involved. The tractor can go out without a driver to record rows with a GoPro so that’s our first step in crop monitoring. It can identify leaf scarring, for example, which might indicate aphids. Then we call on people like Blair for confirmation and a plan to address any issue.”

Blair sees the Forest Lodge enterprise as an exciting innovation. “It’s a prototype for a new way of orcharding. People talk about making change, but Mike and Euan are actually researching and doing things differently with machinery and technology. I think it’s great. I’ve got to think outside the box, brainstorming and sifting ideas, and challenging conventional approaches. One we’re working on at present is under-tree planting with Mike saying he wants a ground cover that doesn’t need too much mowing and helps supress other weeds, without harbouring earwigs. It’s providing many interesting conversations!”