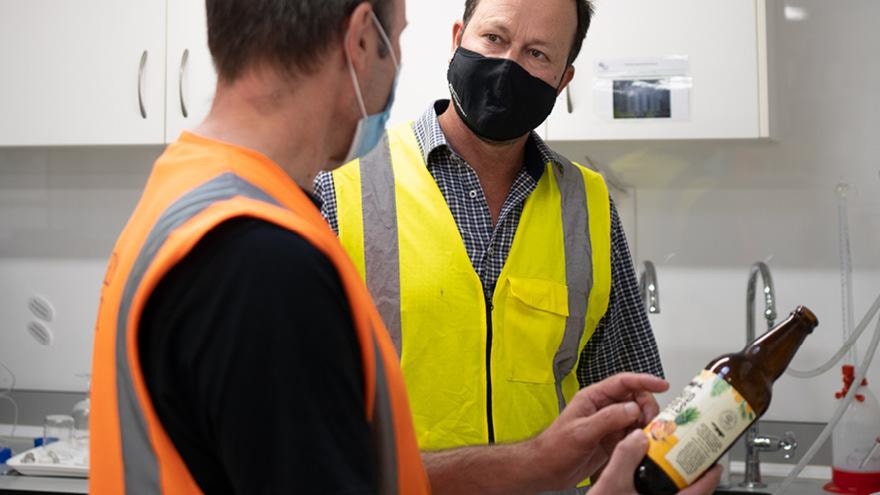 The names Old Mout and Orchard Thieves are well-known by those who enjoy cider around New Zealand and the world. While the name Redwood Cider Co, where these two ciders originated, isn’t necessarily well-known to consumers, it’s highly regarded by apple growers in the Tasman region for whom this is an important outlet for their fruit.

The Redwood name has also been through several iterations over the 75 years since the original business, Noslen Wines, was established in 1947 by Gifford and Wanda Tait on the Moutere Highway. The Taits produced apple wine and cider using fruit from the family orchard, eventually popularising the Old Moutere Cider label, which was affectionately known locally as “Old Mout".

The business name changed to Redwood Cellars at some point over the next three decades as the Taits’ production portfolio expanded to include a range of alcoholic beverages including the ever popular cider and fruit wines, as well as fruit liqueurs, cream liqueurs, gin and whiskey, and even ready-to-drink options. Redwood Cellars also built a reputation for its apple cider vinegar.

Various owners guided Redwood Cellars through the 1980s and ‘90s with continued success for the quality and innovation of the beverages being produced onsite. The fruit wines, in particular, garnered many medals and trophies.

David Sax, Chief Cider Maker for the Redwood Cider Co., picks up the story. “Redwood Cellars was bought by two enthusiastic entrepreneurs, Justin Hall and Scott Chapman, in 2006. They had ambitious plans for exporting apple cider vinegar into Asia. But it was actually the wave in popularity for cider in New Zealand that led to their success.”

Under Justin and Scott’s leadership, Old Mout Cider became one of New Zealand’s most popular cider brands. This attracted the interest of DB Breweries which enlisted Justin and Scott’s assistance to launch Monteiths Crushed Apple Cider, which was fermented at the Redwood cidery.

The entrepreneurial pair won the Supreme Award at the Nelson Business Awards in 2010. They then appeared in the Deloitte Fast 50’s fastest growing companies list from 2011 to 2013.

David says DB Breweries bought into the business in 2012, revamping the name to Redwood Cider Co. “The cider category was enjoying rapid growth and Redwood
Cider needed both investment and access to nationwide distribution. With the cidery already producing Monteiths Crushed Apple Cider for the brewery, it was a natural fit.”

The following year, the team celebrated winning a gold medal at the International Cider Awards with the Old Mout Passionfruit & Cider. Notably, Redwood Cider was the only gold medal-winning cider producer from outside the United Kingdom, long considered the home of cider.

David is proud to note that the Orchard Thieves Rosé cider also won a gold medal in these prestigious awards in 2021.

He continues the story: “When DB Breweries became part of the Heineken group in 2013, opportunities for our cider also became global. Our two main cider ranges, Old Mout Cider and Orchard Thieves Cider, are now produced globally. We are very proud that two of Heineken’s core cider brands originated here in Nelson, sitting alongside the iconic Strongbow and Bulmers brands.”

Redwood Cider Co. is now fully integrated into the DB and Heineken group, continuing to provide dedicated cider expertise. The cidery is the largest cidery in New Zealand, producing around 10 million litres per year. Some of this is bottled onsite, whilst the high-volume product options are transported to the company’s breweries in Auckland and Timaru for bottling and packing.

“Redwood is now part of a global business but that doesn’t lessen our connection to our local community around the Moutere and Nelson region,” David says. “In addition to employing locals, the cidery plays an important role in supporting local orchards, by utilising processing grade fruit that might not otherwise find a market. “We work very closely with a local orchardist and packhouse. Nelson is the second largest apple growing region in New Zealand and the vast majority of fruit that we buy has been grown and hand-picked for export. There is nothing else wrong with eating apples that have been rejected in the packhouse due to a physical or colour defect impacting their marketability. There is limited domestic demand for this ‘reject’ fruit, but naturally this grade of fruit remains of excellent quality for cider production.”

Several Fruitfed Supplies personnel have been part of the Redwood’s journey over the years. David says their Nelson-based Technical Horticultural Representative Jonny Richards has consistently gone the extra mile for them.

“We have used Fruitfed Supplies for many years now, for the supply of a wide range of ingredients, processing aids and cleaning chemicals. The personal service has always been a big strength, from advice on new or alternative products, to navigating our requirements over the year.”

Looking to the future, David says they keep striving to be innovative and to move with consumer trends. “There’s a strong focus on products that are ‘better for me’, for example drinks with lower sugar and alcohol. We’re seeing a trend for soda-based alcoholic beverages developing around the world, so we continue to innovate with our cider products.”