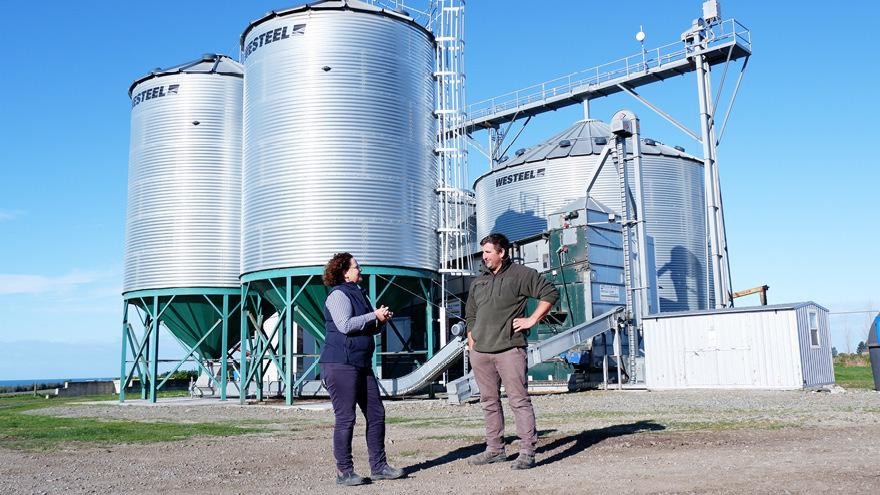 In 2015, Andrew and Amy Darling were helping Andrew’s parents, Warren and Joy, run the family farm located in Timaru. That year, they set a new world record for barley yield with 13.8 tonnes per hectare (ha). The following year, the same combination of inputs on the same variety yielded less than nine tonnes.

“We had a suspicion even in our record year of barley, ramularia was coming in,” Andrew says. “The following season ramularia become a problem and our yields dropped 30 to 40 percent.”

Leaf analysis confirmed the Darlings’ problem was ramularia and they then looked for an effective way to control it.

Andrew and Amy now run the farm and every crop across the 500 hectares must prove its value in a diverse rotation. The main crops are feed wheat and barley, oilseed rape and turf ryegrass seed production plus some beans and sunflowers. It’s high-cost, high input farming, so the reduced yields harvested for several years made barley a marginal proposition.

That’s not the case anymore with the use of BASF’s Revystar to control ramularia in their barley crops.

“Revystar has put the barley programme back into our operation,” Andrew says. “We are averaging 11 tonnes a ha across the entire 140 ha of barley with the same varieties, a mix of 776 and Orwell.”

“We know we have to invest in a robust agronomic programme,” Andrew says, “and that’s where two sprays of Revystar come in. The payback is definitely there for keeping on top of disease.”

Despite natural variation in yields through drier and wetter seasons, and extreme weather like hail storms, knowing they can prevent outbreaks of ramularia has made Andrew and Amy’s feed barley crops reliably profitable. “Using Revystar to manage this disease has given us back the confidence in our barley programme,” Andrew says.

Purchasing their agrichemicals from the PGG Wrightson Timaru store, Andrew is a loyal customer following on from his parents, Warren and Joy, who have been visiting the store for as long as Andrew can remember. The Darlings have also benefited from the advice and recommendations given by PGG Wrightson Seeds Representative, Mark Currie.

“The Store Manager Jan and her team are really good to us. They have a good knowledge base and always go above and beyond. We purchase the majority of our agrichemicals from the Timaru store and the product is always supplied in a timely manner and is priced competitively.”

Revystar forms a part of the Darlings’ foliar fungicide rotation on barley and Andrew thinks this will be the case for the foreseeable future until he notes resistance to the product building. “We see a strong fit for Revystar,” says Andrew.